Tuition-Free Public College Is Not A “Free Lunch” 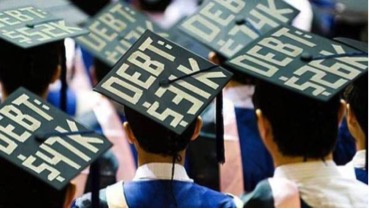 I, however, pride myself on being called a mother, a grandmother, a life partner, and perhaps the first person to tell Bernie Sanders to his face that there’s no such thing as a free lunch.

Many took the statement literally, as though DeVos  meant to say schools shouldn’t provide free lunches for poor students. However, the quip was actually meant to echo Milton Friedman, an economist who is most recognized as a vanguard of the free-market.  Given DeVos’s position as a charlatan of education, it was likely an attempt to disparage Sanders’ campaign pledge of tuition-free public college.

Friedman’s original adage, “There’s no such thing as a free lunch,” was actually intended to describe opportunity cost, and how one can not derive something from nothing. But more importantly, the idea that tuition-free public college constituents a “free lunch” or is somehow against the public’s interest is completely misguided.

Our society’s collective stock of what’s known as “human capital” (i.e., the knowledge, skills, and creativity of labour) in many ways determines how well off we all are. Education acts as a gatekeeper for workers to attain more fulfilling and better-paying careers. It creates a more robust labour force, which serves as the bedrock of the economy. This is increasingly true as higher education plays a greater role in accessing employment for the millennial generation.
Publicly financing higher education would provide more opportunity to invest in our human capital, and greater equality strengthens the  social cohesion necessary to keep the economy functioning smoothly. This would help decrease the US’s intergenerational earnings elasticity (a fancy phrase for class mobility), a measurement synonymous with the entire concept of the American Dream. It might surprise many Americans to learn that the US’s place on the class mobility scale has been quite low in recent years, and has been a part of a larger trend of increasing wealth inequality in this country.

Student loan debt is a large part of that, which now exceeds credit card and auto loan debt, with a total of $1.4 trillion, according to the latest FED data. That’s divided between 44 million borrowers, which means the average student graduated with $37,172 in college loan  debt in 2016. When young people are jettisoned into the job market with such a great handicap, it’s essentially taking an axe to the roots of the American Dream. The students who are not initially deterred by the cost of education find themselves in a common financial situation with the merits of a contemporary John Steinbeck novel.

Along with resuscitating the American Dream and increasing accessibility to higher education, making public college tuition-free could actually reduce government spending. In 2013, the federal government spent around $69 billion on Pell grants and other forms of lackluster financial aid, and billions more subsidizing private for-profit colleges. According to the Department of Education data, public colleges collected around $62.6 billion in tuition from undergraduates in 2012. That would be rather easy for taxpayers to replace with federal funding. Now, $62.6 billion might sound like a lot at face value, but that’s actually just a little over 1% of the federal government’s $3.8 trillion budget.

Yet, even though the US spends a larger percent of GDP on postsecondary education than almost any other developed country, the outcome is tawdry, with graduation rates that rank below 17 other countries. If the “spend more get less” paradox is beginning to sound familiar to our healthcare system, that’s because it is.

To be fair, other developed countries like South Africa are also experiencing turbulence in the way they finance postsecondary education as well, but the need for reform in the US is increasingly obvious.  Last month, San Francisco announced it would be the first metropolitan area to offer tuition-free college. If Governor Cuomo of  New York pursues his similar proposal other segments of the country are likely to follow suit.

Few Americans besides Mrs. DeVos would tolerate a similar scenario playing out with K-12 education, and it’s time to resolve our method of financing higher education for the better of all.