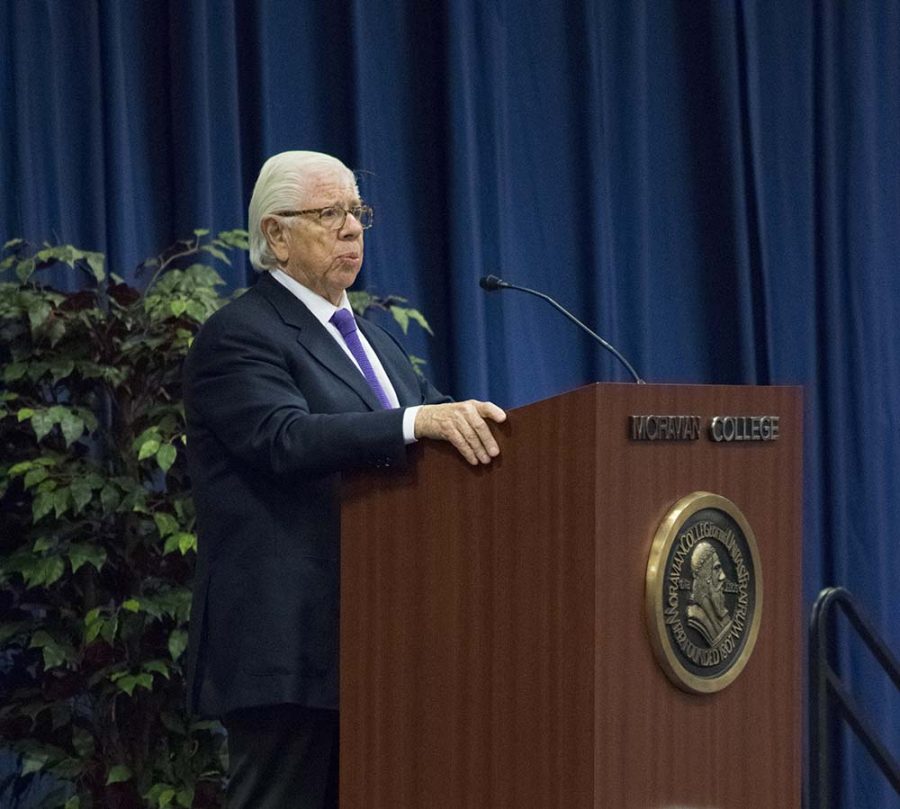 Renowned investigative journalist Carl Bernstein was welcomed to Moravian College on Oct. 24 in Johnston Hall to discuss the “problem in Washington.”

The sold-out event hosted not only Moravian College students, but also community members from around the Bethlehem area. With opening introductions from President Bryon Grigsby and Dr. Joel Nathan Rosen, Bernstein was welcomed to Moravian with the applause of just over 1,000 people.

Bernstein, known for his investigative reporting that broke the Watergate scandal that led to the resignation of Richard Nixon in 1974, spoke about the current problems involving the United States’ political system.

Bernstein began the event by reminiscing about his first job in journalism as a copy boy for his local newspaper The Washington Star. He discussed the purpose of the press as being intended to “exist for the public good” and provide readers with the “best obtainable version of the truth.”

“Our system is straining almost to the breaking point in our journalism, in our politics, and in our larger culture,” said Bernstein. “Meanwhile, that notion of the public good particularly has the underpinning of our politics and our media has been undermined and overwhelmed in my lifetime by self-interest and careerism, bipartisan assertion and by ideological and cultural warfare at the expense of the national interest.”

In both political and social discourse, Bernstein believes the truth is being diluted by sensationalism. He blamed the press, politicians, and the people for allowing the truth to evolve into a system based on “celebrity worship and gossip.” Bernstein’s advice to the public is to find the best obtainable truth by reading and viewing various news outlets and organizations to obtain a range of perspectives.

With the evolution of journalism in response to Donald Trump’s presidency, Bernstein commended reporters, writers, and editors for what he called “a renaissance of truly great reporting–investigative reporting– on the president of the United States.”

“[Journalists have been] committed to the best obtainable version of the truth, and as a result Trump has not succeeded in covering up those matters that he wants to see covered up,” said Bernstein.

Bernstein compared Nixon to Trump, stating that while Nixon’s lying was purely “situational” based on the Watergate scandal, Trump’s lying has “no baseline.” According to Bernstein, the choice to cover Trump’s antics during the election rather than expose his manipulation of the media was “an abdication of national responsibility.”

Bernstein discussed the ways that Trump’s campaign and presidency has been able to express the extent to which American institutions are broken.

“I think we are in a state of a cold civil war in this country,” said Bernstein. “And this cold civil war is debilitating [and] has been 30, 35 years in the making. It didn’t start with Donald Trump, though he’s given enough ignition almost to a conflagration. There are all kinds of passions and elements, including racism, including sexism, and there’s a lot of blame to go around on both sides of the cultural warfare,” said Bernstein.

While Bernstein helped define the problems in the nation, he also provided ways to combat them, suggesting the need for compulsory national service. This would require that 18-year-old Americans complete a year of service, either in the form of teaching, forestry, working in a hospital, or by going into the military.

Bernstein’s  call for change stressed the important role of the public in the consumption of  news and the importance of truth in journalism.