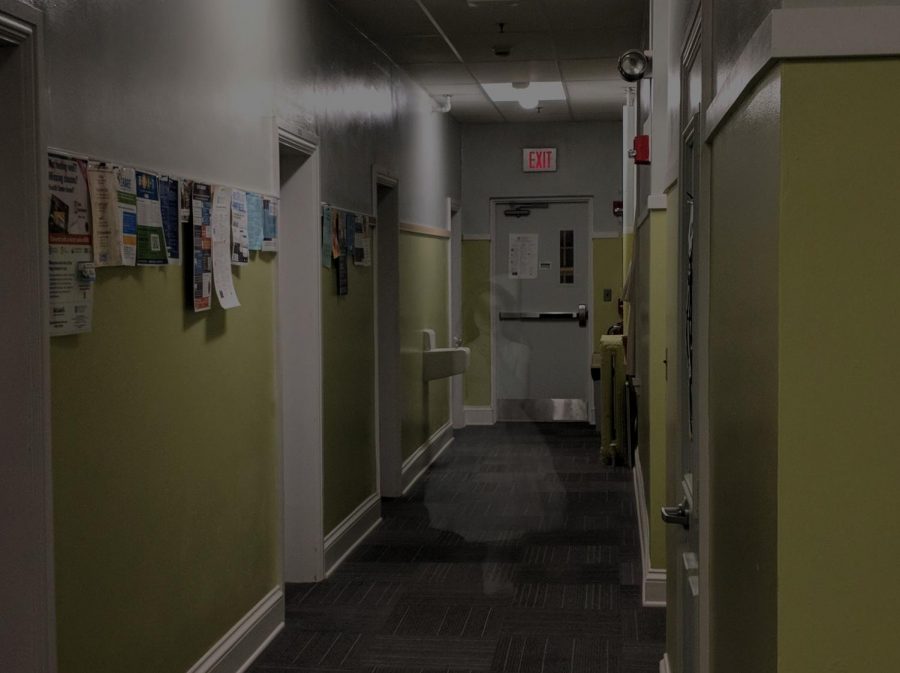 Can you find what makes this picture spooky?

Last fall, I was in the old music building on south campus, Brethren’s, late at night with most of the lights off and no one else in the building. I was packing up some recording equipment with my friend Josh. I walked out of the room  and heard someone whisper, “Hey!” I looked around because I thought it was Josh, but he said it wasn’t him and that he hadn’t heard anything.

We finished packing, turned off the rest of the lights and walked down a dark, eerie hallway. As we walked out, we heard, “HEY!” yelled a little louder. We both looked at each other and decided we should walk a little faster. We walked out of the building and towards our dorm. After a while, we turned around and, let me remind you, we were alone in the building around midnight finishing up a recording project. We noticed that there was a light on in one of the offices on the third floor, and it was definitely not on when we initially went in there.. Not the first time I had some ghostly encounters in the music building.

I’m sure any ghost show you’ve ever seen or ghost story you’ve ever heard began along the lines of, “I never believed in the supernatural until. . . . ” I’m sorry to indulge in that cliché, but I don’t want this story to be disingenuous. I was never a very “spiritual” person. I never really believed in a God, and I always laughed at how horribly staged those ghost shows were. I was about as much of a skeptic as a person could possibly be.

Then, I moved onto campus.

I’d heard murmurs from the first week of classes about weird little things you couldn’t explain, like flickering lights or voices or chills in the air. I’d gone to a small school all my life and was well acquainted with how easily rumors spread and how often they weren’t even the shadow of fact. I wasn’t impressed by some people looking for attention.

It sounds so forced, like a bad movie script when I recount it now, but I can’t deny that something was there this time. I had a paper due that coming Monday, and rather than trying to fight off a horde of people that waited until the last minute, I’d get it over with now while I was doing nothing in my dorm. The hall was a little dead, but it also wasn’t deafeningly quiet either. You could hear people laughing and yelling in their rooms, the usual fare. I went into the lounge and started printing what I needed. The machine seemed to buzz a little louder in the empty room.

I started to get an odd feeling, like I was being watched. I glanced back, figuring someone was behind me waiting on the printer, but nobody was there. I shrugged it off at first, shoved the papers clumsily into a folder and made my way back to the dorm. I got into the hall and felt that feeling at the base of my neck again. I tried to ignore it, but my steps started to feel heavier and I felt something close to anxiety welling up inside me. I had to look back again, and I guess we wouldn’t have a story if I hadn’t.

Oil paintings tend to have this sort of spiral quality to them when you look at them. The brushwork gives a painting a unique sort of look, textured and almost mystical, unreal. I saw the silhouette of a figure just outside the hallway, its whole body enveloped in these spirals like it was some sort of canvas. It didn’t have distinct features, no hair, no eyes, no mouth, but I felt eyes I couldn’t see glaring like fire through me and heard unintelligible, almost inaudible speaking.

I froze. I couldn’t look away from this thing and I didn’t know what it wanted. Was it trying to tell me something?

Then it moved, turning away from me so that I could only see its profile. It walked a slow, uneven march towards the locked hallway with the same intensity that froze me. I felt like I had to follow after it. The fear subsided for a moment as I entered into an almost empty-minded jog. I got close enough to see it phase through double doors in front of me. I tugged on the doors; they were locked, and from the looks of it, for some time.

I don’t remember much about the rest of the night. I went through it more or less stuck in tunnel vision. I slept surprisingly soundly and didn’t tell anyone about what I’d seen until the next day at lunch. As it turned out, I hadn’t been the only one to see a figure. For the first time, I believed it.

The Haunting of Bernie Hall

Our room in Bernie dorm hall is haunted. We have battery-powered lights that require someone to flip the switch to turn them on or off, and every day we both leave the room and come back after class and the battery powered lights are all turned on. Our door will also make a loud slamming sound when it is shut, and if we open the door to see who’s on the other side, no one is on the floor. Our curtains have fallen for no reason. Our room is super haunted.

Man in the Mirror

My roommate, Allison, and I lived in 167 Willy freshman year. We’ve had multiple “ghost” experiences. Our door would unlock and sometimes open on its own. We’ve also heard scratches coming from the walls. Our most memorable experience happened in the middle of the night during the winter. We were woken by what sounded like our stand-up fan being knocked aggressively to the ground. Startled and freaked out, we began panicking. Our friend sleeping over looked  in the mirror on the door and saw a “figure” staring at us through the window. We all felt uneasy and could not fall back asleep. We checked the snow outside our window to see if there were footprints, but there were none. We believe a ghost was in our presence that night.

A Brush with the Paranormal

Last year, I lived in Main Hall and I was always paranoid that I would see a ghost or something would happen to me. I guess I watch way too many scary movies, although there was something that did happen that didn’t feel normal.

One afternoon I was taking a nap and my roommate was not around. I remember suddenly being woken up by what felt like a nudge or a slap on the arm. When I opened my eyes my hairbrush was leaning on my arm and head, since my arm was under my head. I didn’t feel threatened by this and I thought maybe I’d fallen asleep with it like that. Although, it didn’t really make sense to me that I would have fallen asleep while brushing my hair. I didn’t necessarily see anything paranormal but I did feel like I experienced something.