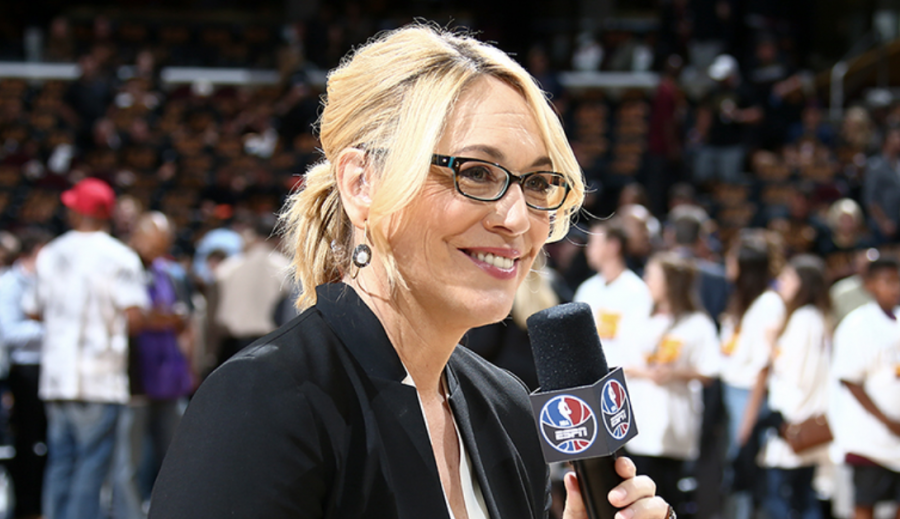 Burke’s success in the heavily male-dominated field was among the many topics of conversation.

Burke began by discussing her views on covering sports. She remarked that it is impossible for her to follow all the actions of ten players moving constantly from side to side on the court as if she was an experienced coach.

Her real strength, she said, is her passion for the game. Burke believes that each person is equipped with unique tools for communication and that reporters need to find and develop theirs.

Burke also discussed TNT’s attempt to appeal to the next generation of fans and “cut through the noise” with players’-only broadcasts, remarking that the voice of traditional commentators should not be lost.

She then talked about her roots, beginning with her undergraduate basketball career at Providence College, whose basketball court was “the only place [she] felt confident.”

Both McCallum and Burke reflected on the negativity that journalists encounter on the job. McCallum said that the only recourse is to be as prepared and professional as possible, giving critics “no choice but to respect you.” Burke, agreed, adding that someone will always say that a journalist did not cover the game right, an annoyance all sports journalists just have to accept.

The conversation then moved to reflecting on the moment when women reporters were allowed into locker rooms and how revolutionary it then seemed. McCallum also considered the difficulty of getting information in such a setting, including watching for certain athletes’ cars to arrive just in order to get a statement.

However, both Burke and McCallum agreed that athletes respected the reporters’ strong work ethic, even though McCallum noted, “you’re a pain in the ass to them 90% of the time.”

Later, Burke discussed her transition from radio to television, contrasting the relatively simple medium of radio to television, with its emphasis on appearance, especially a woman’s.  Her advice? “Let your hair down, soften your wardrobe, and see what happens,” she said, noting that when she first did that she was immediately assigned better games to cover.

McCallum addressed the nuts and bolts of sports journalism, including the proper etiquette for conducting an interview. Younger journalists should take themselves out of an interview, ask concise questions, and not attempt to relate personally to the athlete. “No one cares that [your] cousin [also] lives in Ohio,” he said.

One of the last questions came from an audience member who asked Burke if she believed that being a woman gave her an advantage in her career. Burke said that sometimes she did get an assignment because of her gender, other times not. Regardless, “I don’t shy away from being a woman, nor from having not coached [basketball],” she said.

Finally, Burke reflected on the nature of competition between women sports reporters. Women are too often willing to pull each other down, she said, but noted that  “there’s room for everybody.”