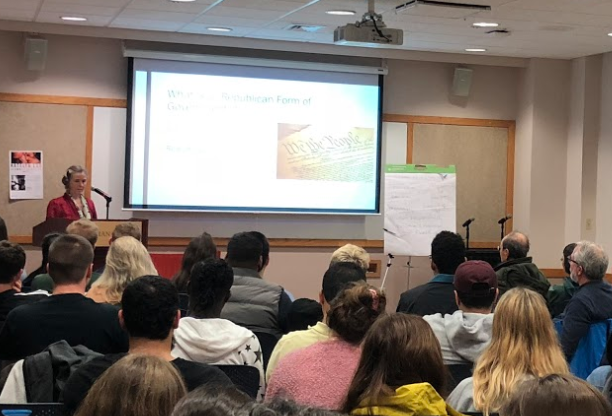 On Oct. 29, Professor Meg Mott from Marlboro College in Vermont presented a structured town hall debate on  the Second Amendment of the United States Constitution. The event had a great turnout, with the HUB’s UBC room packed with students, faculty, and local community members alike.

Due to the recent shooting death of Latricia Ezell, a member of the Moravian’s Dining Services, the event began with a brief statement regarding the tragic loss and a reading by Alison Mott, wife of the speaker, of the names of all the victims of gun violence nationwide within the last week. A moment of silence followed.

Mott’s presentation, entitled “Debating Our Rights,” focused on the question: “How does the Second Amendment help the Republic?”

At the beginning of the presentation, Mott posed the question to the audience: “What liberties do you feel are important to the American system?” Various responses were heard, covering a multitude of stances and opinions, from being in favor of guns being heavily regulated and controlled to being committed to the open use and carrying of firearms.

To get everyone on the same page, Mott began by defining a Republican form of government, which is generally understood to be a government that is representative of the population. She then read the Second Amendment in its entirety stating, “A well regulated Militia, being necessary to the security of a free State, the right of the people to keep and bear Arms, shall not be infringed.” Mott then suggested that the Amendment is open to a lot of interpretation, which leads to confusion over what the Amendment originally meant.

From here, Mott examined an argument concerning a government’s choice as to whether or not to allow citizens to own guns.

James Madison agreed with this idea in Federalist Paper 46, where he argued that allowing citizens to own firearms upheld the balance of power between the states and the national government.

A popular modern view of the Second Amendment, where guns are seen as a tool for self-defense, was also considered. Mott mentioned several examples of court cases of this particular interpretation. In one of them, the case of District of Columbia v. Heller (2008), the Supreme Court held that the Second Amendment affirmed the right of citizens to own firearms for lawful purposes, including self-defense.

The final view, originally advanced by Professor Akhil Amar from Yale Law School, focused on the argument that the subject of every amendment in the United States Constitution is “the People,” as stated in the Constitution’s preamble. In this interpretation, the subject of the Second Amendment would also be the people, giving the power to the citizens rather than to the government.

Given that a Republican form of government is meant to be representative of the citizens of the nation, the interpretation and ruling on the subject of gun control should be up to the people, according to Amar

After the conclusion of the presentation, an open discussion was held. As with any debated subject, there were many viewpoints concerning the interpretation of the amendment, but also on the regulations that should or should not be placed on the use of guns and gun ownership.

One attendee raised concern for the regulation of the types of guns that should be legal. Another attendee mentioned a recent event in which a father carrying a firearm stopped a gunman inside of a McDonald’s by shooting him before he could cause harm. Their example served to support the position that civilians should be able to carry in order to protect themselves and others.

Mott’s structured debate alongside the opinions and concerns of the event`s attendees gave ample insight into the multiple sides of the debate over gun control as well as the Second Amendment.