Put on a Happy Face: “Joker” in Review 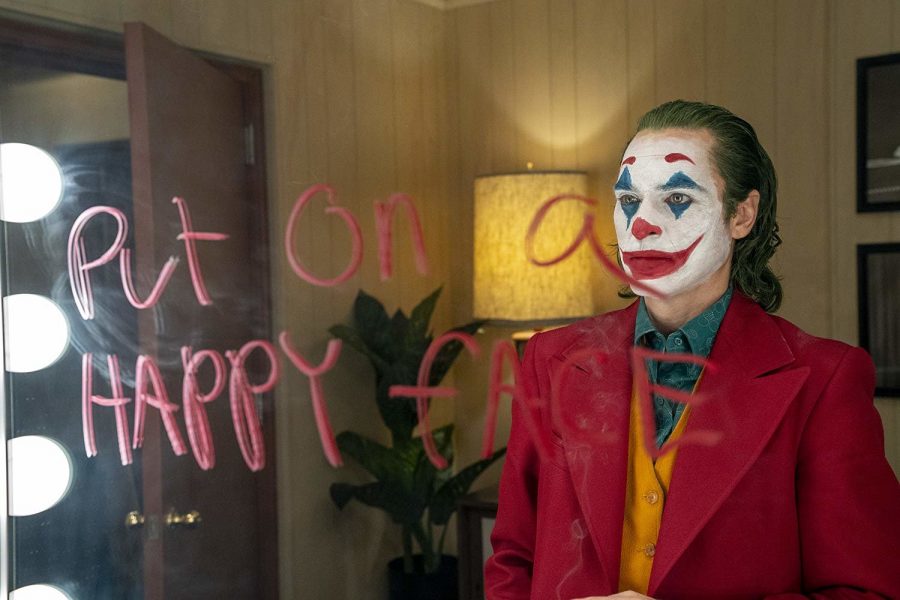 A still from the new film "Joker"

Getting ready for another work day as a rental clown, Arthur paints on his clown makeup looking back at himself in the vanity in front of him, pulling at the corners of his mouth in an attempt to make himself smile. A single tear slides down his cheek, the face paint under his eye running with it.

This scene is the first look into our protagonist’s struggle with depression, which is an ongoing theme throughout the film, “Joker.”

The main character, Arthur, played by three-time Oscar nominee Joaquin Phoenix, lives a dull life in 1981 Gotham City, where he works as a clown for HaHa’s rent-out clown entertainment business. He dreams of becoming a stand-up comedian.

While his aspirations are high, he consistently fails to fulfill them because he’s just not funny. Instead, Arthur is depressed, awkward, and outcast. Called “weird” by his boss, he ends up a constant source of ridicule.

Director Tom Phillips’s inspiration for this interpretation of the Joker stems from the 1988 graphic novel “Batman: The Killing Joke,” in which the character is portrayed as a failed stand-up. The Joker`s infamous chilling laugh is carefully orchestrated by Phoenix, and only comes out at inappropriate times, often when he is facing a stressful situation.

This great detail is no-doubt inspired by a real life condition, the Pseudobulbar Affect, which causes uncontrollable laughing or crying for those affected when they experience high levels of distress.

Throughout the film, we get to see a more intimate side of Arthur and how his mental health — which was caused by childhood trauma and his treatment in society — led him into the  downward spiral that resulted in the birth of the Joker.

Arthur’s first act of violence happens on a train, where he unapologetically murders several wealthy men who work for the Wayne Industry after they relentlessly torment and beat him. Afterwards he performs  a slow and intimate dance in a disgusting public bathroom, a scene which ends with Arthur looking at himself in his clown-face paint. Arthur has died; the Joker has risen.

Despite having committed such a crime, Arthur returns home calmly, almost as if that entire event had never happened. Later on, this single event sparks a city-wide “kill the rich” revolt after the very wealthy and prospective mayor of Gotham, Thomas Wayne, announces that anyone who supports the killer is a “clown.” Knowing that he was the one who ultimately started the riot, Arthur feels as though he finally has the attention he had always wanted. “For my whole life I didn’t know if I even really existed,” says the Joker, “but I do now.”

Phoenix`s interpretation of the Joker makes the character more human than past Jokers, as we see not only his villainous side but the side of him that shows a normal man who is just sad. However, it should be noted that while Arthur does suffer from a mental illness, there is a line to be drawn between a mentally-ill individual and a made-up psychotic killer who gains his notoriety through his violent actions.

Todd Phillips and Joaquin Phoenix re-imagined one of the most infamous characters in the DC Universe with this film and possibly in the whole comic book world itself. Fine acting on Phoenix’s part, mixed with the movie`s disgusting yet perfectly fitting set, cinematography, and beautifully-written script, allows “Joker” to offer a new and brilliant side of the Joker that no one has seen before.

It’s also important to address the discourse that surrounded “Joker” prior to its premier. After the 2012 Aurora, Colorado, shooting, where a man opened fire in the Cinema 16 movie theater during a screening of “The Dark Knight Rises” resulting in twelve deaths and 84 casualties — plus the all-too- frequent mass shootings occurring across the United States — the owners of many theaters were worried that “Joker” would inspire acts of real-life violence.

Some theaters chose to nix the idea of screening “Joker” altogether, while others posted signs outside of the theaters that prohibited guests from wearing face paint or from bringing large bags or backpacks into the theater itself. Thankfully, no violent incidents have occurred since the movie’s premiere on October 4th, 2019.