KISS, More Than Just a Concert: A Review 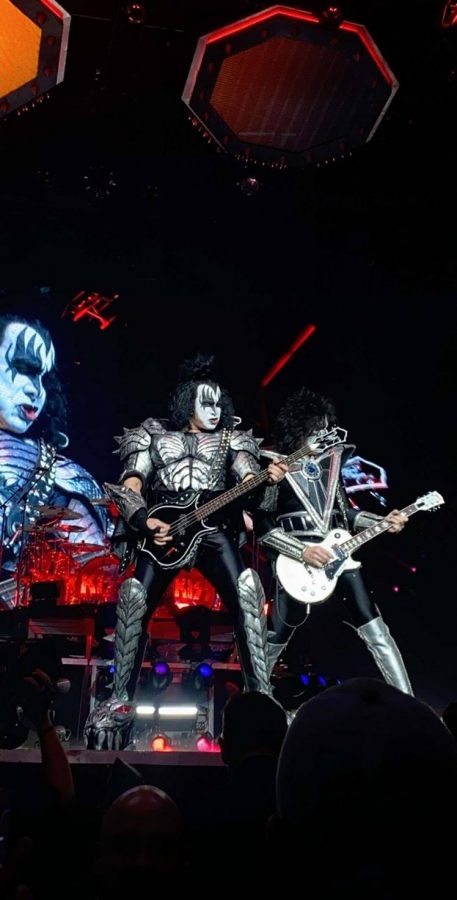 As I sat in standstill traffic in a cold, unnerving parking deck in Allentown, I couldn’t help but think about how I could check seeing KISS live off my bucket list.

It was my first rock concert ever and it couldn’t have been more perfect.

For those who don’t know, the rock band was formed in the early 1970s and is currently on their final “End of the World” world tour. When I found out that they were going on their last tour ever, I was both equally surprised and upset knowing I’d never have the chance to see them in concert because of how popular they were and how expensive the tickets were going to be. This band holds a special place in my heart, because music is something that my dad and I were able to bond over when I was little, and even now as we grow older. My father grew up in the 1970s and 80s, and has always been a fan of unconventional bands and artists like, Metallica, Rob Zombie, Pink Floyd and, yes, KISS. When he was younger, he found going to concerts exhilarating and loved being able to see his favorite artists in person.

In the middle of November, my mom and oldest sister, Jess, mentioned the possibility of getting my dad tickets to see KISS at the PPL Center in Allentown. Everyone in the family agreed that this would be the big present for his 50th birthday in January, and that I would be able to share this experience with him, knowing I had never been to a real concert before.

I’m sitting in the section right in front of the stage in the far back of the PPL Center, tie-dyed KISS “Destroyer” (1976) T-shirt on, my leg shaking with anticipation. My dad, being who he is, did a full face of make-up, wig and all, that resembled Gene Simmons’ stage persona, The Demon, while sporting a different version of the KISS “Destroyer” T-shirt.

At exactly 7:30 p.m., the opening act, David Lee Roth from Van Halen, started singing and jumping around on stage.

Personally, I am not a huge fan of Roth. He doesn’t interest me as much and I really only know a handful of songs by him and his old band. I watched for a little bit out of respect but grew tired of not being able to hear him and the bass completely drowning him out. After about 45 minutes on stage, he was done with his set, which led to a very long break that I was dreading.  With every minute passing, I could feel myself getting more and more tired because of how late it was getting, but I was determined to enjoy myself the whole time.

At around quarter of 9:00 p.m., the lights began to dim and the voiceover forced a quick hush over the crowd before we erupted into chanting and screams.

I got my camera ready because I did not want to miss any of my favorite songs. The voiceover then played, “You wanted the best, you got the best, the hottest band in the world… KISS!” as they emerged and began playing their hit song, “Detroit Rock City” (1976), to get the crowd in the mood. They continued right away with “Shout It Out Loud” (1976), which is one of my favorite songs from the “Destroyer” album. They played a nice mixture of classic KISS songs, even some I had never heard before! Paul Stanley, also known as Star Child, was announcing and trying to get everyone in the audience involved, which I thought was great because I didn’t expect the concert to be so interactive.

In between the songs I didn’t really know or care for, the band made sure to keep the crowd interested. At some points during the show when people started to get antsy their extra stage entertainment began.

First, Gene Simmons bit a blood capsule and bled from his mouth, and a little later, he breathed fire, which was amazing. Tommy Thayer, also known as the Spaceman, was suspended in air and brought to a separate platform to perform during one of the songs. Eric Singer, also known as The Catman, had a featured drum solo that went on for several minutes. They then played “God of Thunder” (1976), “Psycho Circus” (1998), and “I Was Made For Lovin’ You” (1979), which excited me to no end.

After the last song of their original setlist, KISS thanked Allentown for a great night, and the stage went dark.

At this point, many people started getting up to leave. However, I refused to do so, and the fans  started chanting for an encore. A few minutes or so later, Singer rose from below the stage, playing a grand piano. I immediately started singing the beautifully written ballad “Beth” (1976), which is one of my top favorite KISS songs. The whole band then finished out the concert by playing their well-known song,“Rock And Roll All Nite” (1975).

The overall experience was overwhelming. My senses and mind were so overloaded with pyrotechnics and the smell of kerosene that I could not think straight. I was amazed by how all of the members could still move and sing, even in their 60s and 70s —  especially Paul Stanley, who sounded the exact way he did from the recordings from 30 years ago. After the concert, my dad and I blasted their music the entire way home. The feeling of adrenaline coursing through my veins was exhilarating.

It has now been a week since we saw the concert, and I still can’t get over the fact that I was privileged enough to see one of my favorite bands during their final tour. So many people have asked me how the concert was, but I genuinely can’t remember how I felt at that exact moment.

Although the concert was amazing because of the entertainment and the artists, that isn’t the main reason why I had such a great time.

The thing I remember most vividly was just watching my dad during the entire concert. He was genuinely happy and carefree. He couldn’t take his eyes off of the stage and would not stop singing, even the songs he didn’t know too well or like much. There is just something about watching someone you love enjoying themselves that makes everything better. Being there with him to experience KISS will always be one of my most cherished memories.