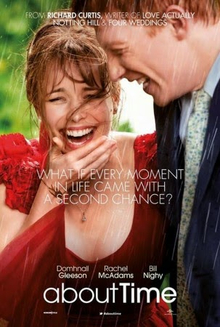 This movie is my personal favorite. It follows the story of Tim, a young man who finds out that the men in his family are time travelers. Tim soon uses his newfound ability to woo a girl (Rachel McAdams) because, being the quirky guy he is, he wants their first meeting to be perfect. Filled with equally funny and touching moments, “About Time” is a rom-com you definitely want to watch.

Comprised of an all-star cast including big names like Emma Thompson, Liam Neeson, Keira Knightly, and Alan Rickman, “Love Actually” follows the lives of several couples in various stages of their relationships. Marriage, unrequited love, puppy love, language barriers, workplace romance, and an emotional affair are all part of this movie. By the close of the film, it is apparent that all of these couples’ lives intersect in some way. It’s definitely a cheesy movie, but it’s sweet and entertaining nonetheless.

Nicholas Sparks did not fail to make me sob with this tale. “A Walk to Remember” is a movie based on Sparks’s novel of the same name. It follows teenage Landon who gets into a bit of trouble and is forced to join the school play as a punishment. There, he meets Jaime (Mandy Moore), the pastor’s daughter who is a bit of an outcast. Jaime makes Landon promise her one thing: he won’t fall in love with her. And the story goes from there. It’s equally heartbreaking and heartwarming.

While “Mamma Mia” is a total cheesefest, who wouldn’t want to listen to ABBA music for nearly two hours? The movie follows Sophie (Amanda Seyfried) as she is preparing for her wedding. Sophie wants to invite her dad, but the problem is that she doesn’t know who he is. After finding her mother’s (Meryl Streep) diary, she realizes that three men are potentially her father. She then does the obvious thing: she invites all three of them.

Based on John Green’s novel of the same name, “The Fault in Our Stars” follows Hazel Grace as she falls for Augustus ‘Gus.’ Hazel Grace has cancer, and she meets Gus, a cancer survivor, in a church support group. She warns Gus that she’s a ticking time bomb, but the two fall in love anyway. I can’t say much more without giving things away, but “The Fault in Our Stars” is a bittersweet story I’d watch one thousand times over.

This wholesome movie is what society and the romantic comedy genre needed. The film follows the life of a young high school student who chooses to keep his sexual identity a secret from everyone in his life because he is afraid of being bullied. One day, someone anonymously posts to their school website that they are gay. Simon, the main character, then starts corresponding with this anonymous boy who goes by the pseudonym “Blue” throughout the entire film. I’m not going to spoil the ending, but this movie showcases how people in the LGBTQ+ community can feel when it comes to opening up about their identity, especially when dealing with the hardships of high school.

If you love a good fictional romance-drama about literary authors, this one is fantastic. This movie follows the story of a young William Shakespeare and a girl who becomes his love interest and assists him throughout his writer’s block. Throughout the movie, you get a taste of gender inequality, class divide, and Shakespeare’s famous works.

This Netflix original is hands down one of my favorite romantic comedies of all time. I’ve seen it so many times that I can probably quote it by heart. The two main overworked characters meddle in their bosses’ lives in hopes that they will fall in love. Throughout the movie we see the scheming come to an all time high from these two workers, and in the end the watcher wants to root for more than the bosses’ relationship to bloom.

In this film, Henry, who is played by Adam Sandler, tries to win the heart of a woman named Lucy, played by Drew Barrymore. After wooing her the first time they meet, he tries to go further with their relationship. Henry finds out that she has short-term memory loss and relives the exact same day over and over again with the help from her father and brother. Sandler’s character must prove to her family that he’s in love with her and would do anything for her. Who wouldn’t love this movie? Adam Sandler and Drew Barrymore are one of the greatest duos in the history of friendship and acting.

If you want a movie that makes you feel equally goopy and sad inside, this film should be your go-to. Louisa Clark (Emilia Clarke) finds herself hired as a caretaker to a man, Will Traynor, who was left paralyzed after a vehicular accident. Throughout the movie, you see his cold attitude towards her and life in general begins to lighten as her optimistic outlook on life makes him want to feel alive again. 10/10 for choice of actors, 10/10 for story plot, and a 10/10 to everyone who helped make this movie because it has made me squeal multiple times.