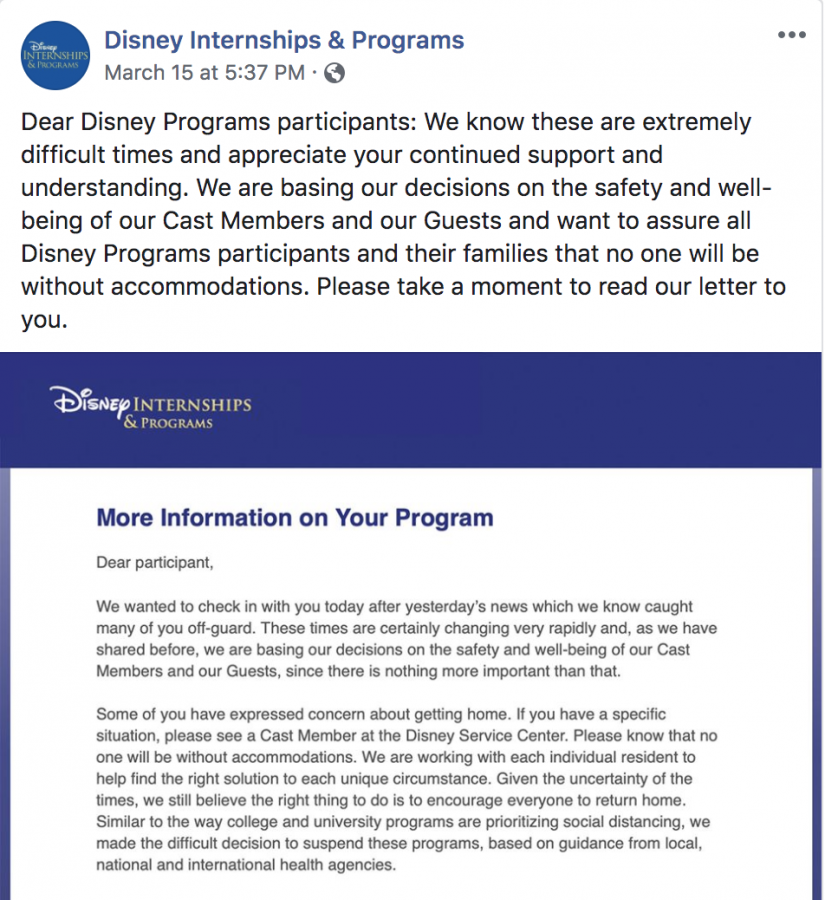 A screenshot of the Disney College Program's Facebook post announcing to the public that they will be ending this semester's program short.

As colleges across the nation have been closing in order to prevent the spread of COVID-19, they’ve been closing their study abroad programs, too. One of them is the Disney College Program.

The Disney College Program, to which Moravian has sent undergraduates in the past, allows college-aged students to gain experience working in Disney parks and resorts, participate in college coursework, and have the opportunity to meet, work, and live with people from all over the world.

According to the Disney College Program website, the program lasts anywhere from five to seven months and allows participants “to network with leaders, take part in personal and career development classes, and build transferable skills such as problem-solving, teamwork, guest service and effective communication.”

Besides being a program for college students to learn important skills for their future careers, it also allows students to form bonds with other participants in the program.

No Moravian students joined the program this semester. But junior Ryan Scott participated last year and recalls her experience fondly.

“The most rewarding thing from the program were the friends that I gained,” she said. “After most shifts, my friends and I would go get food after our late night shifts, and we would just be together for hours and hours; sometimes until 3 or 4 in the morning.”

On March 14, participants were notified via email that the program would be ending early. This decision came days after the Disney corporation announced that both Disney World and Disneyland would be closed through the end of March.

“My heart hurts for everyone who was down there, because I know I would have been heartbroken if I did my internship now and had been forced to be sent home,” Scott stated.

Senior Lauren Balbierer, who was recently accepted into the program to participate in the upcoming fall semester, expressed similar sentiments.

“For me it is sad to see the program and all the Disney parks close,” she said. “But I keep in mind that they are doing so for the safety of their guests and workers. I also feel heartbroken for the spring college program participants whose programs had to be cut short because of this. However, I know that Disney is working hard and making sure that all participants affected will have a chance to do the program again if they wish.”

Many questions were raised in regards to the quick closure and turn around with making the college students leave. Many participants were worried about getting home and being able to collect their belongings in a timely manner. The participants who did not live on Disney property were also worried how they were going to pay their rent, as they were now unemployed.

“I had a lot of friends down there who lost their jobs,” Scott said. “Most of my friends extended their internships from the time that I was there, but I decided to come back to school. Some friends had to pack up their whole lives and move either across the country, or even across the world, in a matter of days.”

While many people are hoping that the coronavirus threat will be diminished by the summer, there is still a chance society will not be back to normal by then.

However, Disney seems hopeful that their summer and fall programs will be able to continue as scheduled. A post was published on their College Program Support page stating that fall semester participants or people arriving from April 20 and later are expected to arrive as normal.

In regards to the possibility of the fall program being delayed, Balbierer stated, “I will still be happy to go down and do the program even if it is delayed. I try and look at the positive side and think that even if the program is delayed by a couple months, I will still be able to help with making magical memories for guests that come to Disney, even if it isn’t for the same amount of time as my program is supposed to be.”

The coronavirus has left college students around the world feeling uneasy and worried about this semester and the future. It is hard to predict what all will continue to happen or how the future will be affected, but it is important to realize that things will eventually have to go back to normal. Companies like Disney are striving to go back to normalcy as soon as possible for their employees, college students, and guests, which is commendable on their part.

“My heart really does hurt for all of the cast down in Florida,” Scott stated. “The cast is truly one big family, and right now it is broken. I feel awful for my friends having this amazing experience just taken away from them.”