Take Back the Night Goes Online: Vital but Incomplete 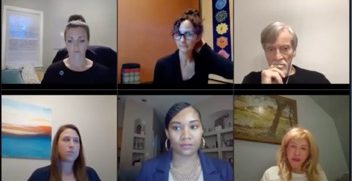 Take Back the Night on Zoom

Each year during the spring semester at Moravian College, the American Association of University Women (AAUW) sponsors Take Back the Night, a march from South Campus to North Campus followed by a rally in which students, faculty, and staff are invited to gather together and protest sexual, relationship, and domestic violence on college campuses and in the larger community.

Due to the coronavirus, this year’s event took place online.

On April 30th, the national Take Back the Night organization held a live, global webcast, which members of Moravian College were invited to “attend” through a Zoom meeting with Leah Naso, Moravian’s Title IX Coordinator. Each of its eight speakers made a five-minute presentation.

I wondered how the organizers could fit everything into such short time slots.

Since my freshman year at Moravian two years ago, I have experienced Take Back the Night as a day of understanding, in which the college community listens to one other, expresses their grief, and grows closer.

There are some who come with the desire to speak their truth, some who wish to learn, some who are there as a support system, and others who come to feel the sense of power and pride that accompanies this expression of togetherness. I have always been awestruck over the ways that my peers at this event express their emotions through anger, tears, struggle, celebration, acceptance, art, dancing, singing, and poetry.

It reminds me that two things are true: we never know what those around us have struggled with, and that the number of people who have suffered from intimate violence in this world is heartbreakingly high.

Before the speakers gave their presentations, Katie Koestner, moderator of the event and activist against sexual assault, provided a trigger warning and then began to tell her story, one that was part of introducing the world to date rape and being sexually assaulted by someone the victim had just started dating.

Following this, yoga instructor Carrie Coppola led everyone in a grounding meditation, reminding us that, “No matter where we are, whatever the distance between us, we are in this together.”

Susan Marine, professor at Merrimack College, emphasized that, “The personal is the political.” She provided insight on the difference between the first Take Back the Night event in 1978 (when protestors challenged pornography, domestic violence, and sexual trafficking, and marched naked and carried bouquets of tampons) and the marches of today, in which protestors have become truly inclusive of all people and fight to raise the voices of all survivors.

Professor Sandra Miles of Flagler College then read true stories from survivors, and emphasized that “no” means “no.”

Activist John Stoltenberg discussed the “perpetrator class,” defining it as, “a class in a top-down system [with a] power and status that precedes the people born into it, because it keeps certain people in power.” Members of this class can “opt out of it by acting as an ally in the movement to end sexual violence,” he said.

There were additional readings of survivor stories (including “The Verbally Abusive Relationship” by Patricia Evans), discussion of resources for survivors such as the TBTN Justice Hotline and free legal support provided by the Rape, Abuse, and Incest National Network (RAINN), and conversation about the involvement of men as allies in the context of sexual assault.

The webcast ended with a reading of an excerpt of a letter from Chanel Miller to her attacker in the case of her sexual assault, another meditation session, and a final statement from Koestner who said, “Speak your secrets, tell your truth.”

For Moravian, the online forum gave students access to speakers the College couldn’t have afforded to bring to campus.

For one, it didn’t allow audience members to participate or communicate with the speakers. Given the online forum, I also found it odd that none of the speakers mentioned that many people are currently being forced to quarantine with their abusers, and that reaching out and receiving resources would be incredibly difficult for these victims.

I was interested in hearing what Stoltenberg and Gordon Braxton, peer educator in an all-male anti-violence group at the University of Virginia, would be presenting on, since I knew that their segments would be centered around male inclusivity and men’s involvement. However, it seemed as if the idea of men and nonbinary people as victims in the context of sexual assault was being tiptoed around rather than addressed directly.

More than anything, though, I missed hearing the voices of Moravian College members.

At one point during meditation on the webcast, Coppola whispered, “Say to the world, ‘I am here. This is me.’” I longed to find this moving, but I wanted to be saying those words with my classmates, peers, professors, and college faculty members.

Despite the fact we were unable to have an in-person AAUW-sponsored march and rally, I hope the online event was enough to encourage Moravian College community members and survivors to come forward and seek support.

After the pandemic passes, we will return to campus and once again be able to march alongside our Moravian family. Until then, we need to know that Moravian organizations are still doing everything possible to provide for victims within our community and to allow them to speak their truth.

If Moravian students have feedback about sexual misconduct and/or legal processes, it is safe to send feedback through the submission of an anonymous Title IX form.

The College Counseling Center counselors are also available for appointments over Zoom. Other sources include the Crime Victims Council of the Lehigh Valley (CVC), the National Sexual Violence Resource Center (NSVRC), and Turning Point of Lehigh Valley.