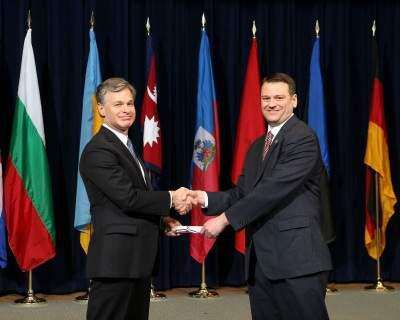 On October 9, Chief Michael Marks of the Whitehall Township Bureau of Police talked over Zoom to a group of Moravian students and faculty about careers in law enforcement.

Marks has served the Whitehall community for 21 years, rising through the rolls of patrol officer, detective, and, for most of the last five years, chief.

Marks graduated from the FBI National Academy, which he referred to as a “master class,” a five-week graduate school for police officers where he learned new training and procedures. The program can be completed by most officers with permission from their department.

Marks reiterated many times that when joining any type of law enforcement, you should do it with integrity and honesty, which are the qualities that any hiring precinct will look for in a candidate.

Marks then went on to explain the adjustments that the police in Bethlehem and other Lehigh Valley departments have made in the past couple of years to ensure that all citizens feel safe. In doing so, he stressed that in the last 20 years that the excessive use of force has been considered as a last case scenario in the Lehigh Valley.

He stated that chokeholds have been banned and that officers are being trained in alternative ways of addressing violent situations, including de-escalation. Some of these techniques include issuing verbal warnings and intervening when fellow officers are seen using excessive force.

When excessive force has to be used, Marks said that officers need to provide comprehensive documentation about the incident and submit it to their departments for recording and investigative purposes. “There has not been a larger change in policing as [this] in the last 20 years,” Marks said.

Marks spent the second half of his talk covering the steps and processes that someone would normally have to go through to join law enforcement. He made it clear that these steps are used at almost every police department nationwide.

Before they can become police officers, applicants have to pass a written examination, physical assessment, oral interview, background investigation, polygraph, drug screen, and then a psych evaluation.

Marks emphasized that the background checks are extensive, and applicants need to be totally honest on their application.

If an applicant is able to continue through all of the steps above, then they are offered a job by a police department(s) and sent to a police academy, which is basically a “mini college” that lasts around 25 weeks and is paid.

At the academy, future officers learn techniques (like self-defense and gun safety), state, county, and federal laws, how to operate the vehicles, and other crucial information to be able to work in the field. Once they graduate from the academy, officers are looking at about four to six months of field training for the department before they are able to police independently.

Jay Pruden, ’21, a sociology major with a track in criminal justice, asked about how locations are classified. Marks explained that cities, townships, and counties are established by population size, which determines their funding and access to resources.

Dr. Debra Wetcher-Hendricks, a sociology professor at Moravian, asked Marks if he had any suggestions and warnings for students about what they should be doing now and what they should not be doing in order to be able to make a career in law enforcement.

Marks said to do research on the different departments that you want to apply for. See first what their requirements are and what qualifications they are looking for. He also said that students who have experimented with drugs should look for the timeline (of last use) that the department’s post. Students with felony convictions (including juvenile convictions) have no chance of being hired.

For those interested in a career in law enforcement, Marks suggests that they visit their website of Lehigh County, which provides information on all applications and testing sites in Lehigh County, as well as testing dates, locations, and what departments are hiring.