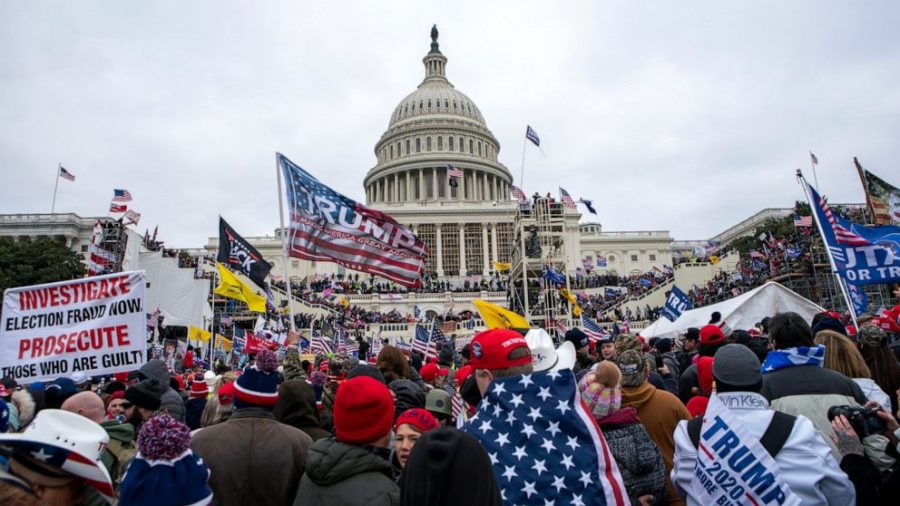 Outside the US Capitol on January 6th. Photo Courtesy of abcnews.go.com

At approximately 2:20 p.m. on Jan. 6, 2020, members of the 117th United States Congress had to stop confirming the electoral votes of the 2020 Presidential election so they could take shelter and begin evacuating the House Chamber of the United States Capitol.

Outside, a massive pro-Trump mob had breached the building, breaking windows and attacking Capitol Police while proceeding to loot, vandalize and occupy the building for several hours in attempts to overturn the election results.

This attack came after former president Donald Trump called on a crowd of supporters during his Save America rally in Washington D.C., earlier that morning saying, “If you don’t fight like hell you’re not going to have a country anymore” and instructing them to march to the Capital to, “cheer on our brave senators and congressmen and women, and we’re probably not going to be cheering so much for some of them.”

Throughout his speech, Trump continued to push the false narrative that fraud had led to his losing the 2020 presidential election.

Many of the individuals caught vandalizing the Capitol building that day have been exposed as believers of QAnon, a far-right conspiracy that alleges that a group of elitist Satan-worshipping pedophilic Democratic politicians, journalists, and entertainers have sought to undermine former President Donald Trump in order to prevent him from winning the presidential election.

This conspiracy started early in Trump’s presidency on forum sites like 4chan and 8chan, but their message quickly seeped into more mainstream social media platforms like Facebook and Instagram as the 2020 presidential election approached. Believers of QAnon commonly spread false information regarding Black Lives Matter protests, COVID-19, and of course the 2020 presidential election with their slogan “Stop the Steal”.

Trump has repeatedly shown support for QAnon, frequently reposting from QAnon accounts on Twitter, saying that those who support it are “people that love our country,” and flashing their slogan during his speech at the Save America rally, “To use a favorite term that all of you people really came up with, we will stop the steal.”

The riot at the U.S. Capitol resulted in five deaths, over 175 arrests and the resignation of 11 officials from the Trump Administration.

The breach of the United States Capitol building was unprecedented in modern US history.

Given the gravity of the situation, The Comenian asked Moravian students to share their thoughts on the event.

Most responded with utter disbelief, while others acknowledged the event as a result of years of misinformation put out by Trump and his administration. One senior year music education major said, “I must say I thought it was an absurd action, but I am genuinely not surprised that individuals of this country convinced themselves it was ok to do this.”

There has been some debate in the mainstream media on whether or not Trump himself instigated the violence that occurred at the Capitol in his speech on that same day.

Some students felt that the attack had a direct correlation to the type of language Trump used in his speech, while others like health science major Blake Shuck ’22 said, “I do not believe that Donald Trump orchestrated this, but I do believe that he greatly contributed to the violence and destruction – at least in part. Although he did not specifically tell these supporters to storm the capital, after they remained there for a while, he continuously encouraged them to continue.”

Given that the mob set out to overturn the results of a fair election, it’s easy to see the events of Jan. 6 as a threat to democracy in America.

All students who were interviewed agreed that the storming of the Capitol only weakened their views of U.S. democracy.

“I think this event shows how fragile our democracy is,” One junior year psychology major said. “Whoever is in power has a lot of influence not only in the U.S. but on the entire world. One person can be responsible for inciting so much hatred, division, and violence and can try to undermine everything. I think we are still fragile as a nation right now. We are extremely divided still, and the storming of the capitol has only made it worse.”

With a new presidency now in full swing, we’ll have to see how the country changes over the course of the next four years. Hopefully, we as a country will be able to recover from this tragedy and move on together as a more united nation.