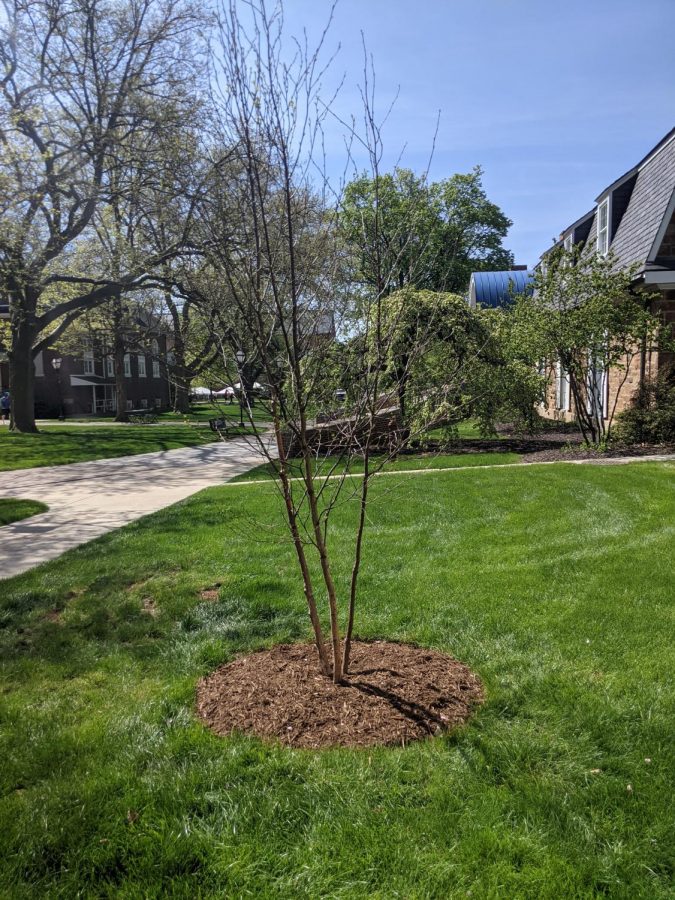 At noon on April 23, a dozen students and other Moravian community members planted a paper birch tree in front of Reeves Library in honor of Earth Day.

For the past 12 years, Moravian has marked the event by planting a native tree, which is endemic to the Bethlehem region and that thrive without much tending.

The paper birch, which can grow to a height of 70 feet and spread a canopy as broad as 35 feet in diameter, gets its name from the smooth white bark that curls and peels as the tree grows. It is also referred to as a white birch or a canoe birch.

When introducing the tree, Morgan Weaver, who is majoring in environmental science, said she chose the variety because it reminded her of her childhood, when she and a friend played beneath a paper birch in her backyard.

Morgan also selected the tree because of its community aspect, as people have long used the paper-like birch bark to write messages on and pass from person to person.

The new birch joins the College’s inventory of trees, some 2,000 of which have been tagged and logged in a searchable online map. Among them are a number of so-called Heritage Trees that were planted over a hundred years ago.

Two people read short poems to mark the planting. Assistant chaplain, Laura Oesterle, chose to read Ilan Shamir’s “Advice From A Tree,” because, she said, trees are a welcome sign of hope in our current state of hopelessness due to COVID-19.

When asked about the event, first-year environmental science major Allison Ludlow ’24 said the planting showed the community aspect of Moravian, with the tree bringing new life to the historic campus.

After the readings, Randy Haffling, assistant director of grounds and logistics at Moravian, invited the attendees to pick up a spade, shovel soil into the hole, and plant the newest arrival to Moravian’s leafy landscape.