Rant of the Week: My So-Called Dorm Life 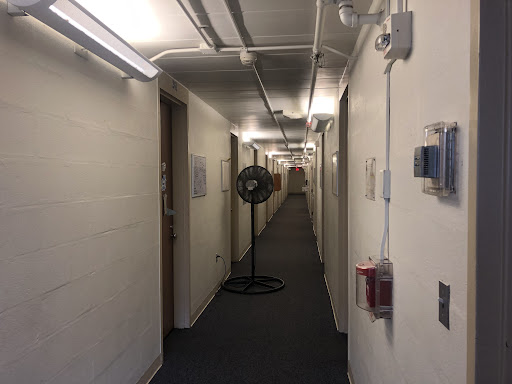 Dorm life seems to be a fairly controversial topic among students. Some love it; some hate it. But detached from the rest of college life such as classes, friends, and activities, how is dorm life itself?

Well, let’s say if my dorm were a hotel, it would not get five stars.

I live in Wilhelm – yes, the one without air conditioning. To many, this may not seem like a huge issue like I originally thought, but oh wow, this really makes me miss when my grandparents’ house was a freezing icebox.

The first weeks of the semester were absolutely dreadful, as every time I walked into my room it would be disgustingly hot — so much so that I didn’t sleep with any covers or sheets on my bed for the first the weeks of fall semester.

You may ask “why don’t you just get a fan?” But the problem is that I did — six of them to be exact. Even with four fans blowing directly on me I still felt like I was dying of heat at night.

The lack of air conditioning would have been fine if we’d at least been allowed to have a window unit, but for some reason, we can’t. Are we told why? No. We are just simply told we can’t have a window unit; thus we are left to die of heat for the first four to five weeks of class.

At first, I thought that maybe the building is very old, so it would be extremely expensive to put an air conditioning system in the building. But Bernhardt-Wilhelm and Rau-Hassler were built only five years apart in the 60s, and Rau-Hassler got renovated in 2016 and has central air. Now I’m not an engineering expert, so I have no idea how much it would cost to air-condition Bernhardt-Wilhelm, but if it was doable for Rau-Hassler, one would think it’s doable for this. At the very least, if we can’t have air conditioning we should at least have good toilet paper.

Besides the dreadful lack of air conditioning, what else is wrong in Wilhelm and what can the university  do about it? Well, sadly they can’t do anything about this issue because it is something completely out of their control. This issue is that people in the dorms just don’t have fundamental common decency.

First off, the bathroom etiquette is downright horrendous.

People seem to have completely forgotten how to flush a toilet. I’d at least be understanding if they followed the “if it’s yellow, let it mellow; if it’s brown, flush it down” rule, but people don’t even follow that. They just leave their poop to marinate until someone gets the bubonic plague. Just remember, these aren’t toddlers learning how to use the potty: these are grown adults not flushing the toilet on a regular basis.

People also just don’t clean up after themselves.

More than once I have seen a toilet have pee droplets or hairs on it, toilet paper on the floor, etc. It’s one thing when it’s a restroom at Target or something (still not acceptable), but it’s another when you share this space with over a dozen other people living here and you don’t know how to clean up after yourself.

Though I will say the cleaning crew at night does a really good job of cleaning the hallway and bathroom, and in the morning it’s always spotless. So many thanks to the cleaning crew for preventing us from getting the bubonic plague.

Also: some dude has left his underwear in the shower room since the beginning of classes.This implies two things — neither of which are good.

Scenario one: he has not taken a shower in over a month; in that case yuck, that’s nasty. Or scenario two: he’s really content with having his tighty whities on display for the whole dorm to see, which is just a tiny bit odd. Also, to anyone, this applies to and you know who you are, please stop leaving your soap in the showers; they are not there for you to reserve like a seat at a restaurant.

It’s not just bathroom etiquette though; some people just don’t know how to behave or function.

It’s insane that they got through high school. On numerous occasions, there have been some daft neanderthals yelling and causing a ruckus in the hallway at 1:00 in the morning.

It’s not like it’s only a problem in the hallway either, because I hear them from down the hall with my door closed. On the night before writing this, some pea brain decided it would be funny to continuously pound on my door at 1:00 a.m. like a toddler needing attention.

So in conclusion, Moravian, please get air conditioning in Bernie-Willie as soon as possible. For Moravian students, please flush the toilet, clean up after yourself, don’t be an obnoxious hooligan at 1:00 in the morning (or ever), and most importantly, please take your underwear out of the shower.