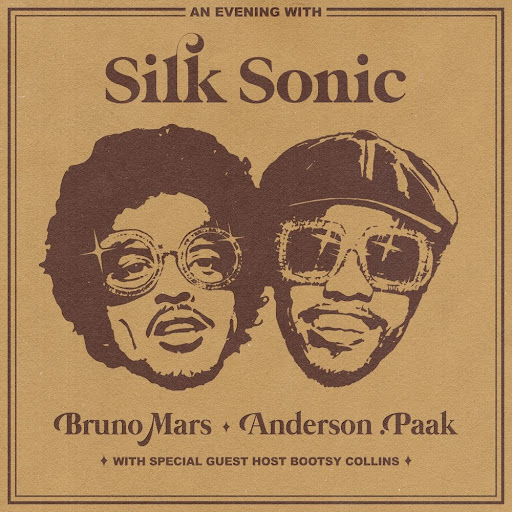 Silk Sonic is the brainchild of pop superstar Bruno Mars and hip-hop/rap powerhouse Anderson Paak. The two musicians had been friends for years with Paak even serving as the opener for Mars on his last tour. Without any real plans to put out an album, the two started making music together under the alias as a joke. After some time, the two realized the potential of the songs they were creating and Silk Sonic became a passion project for the duo over the course of the pandemic.

Little did fans know that greatness had been staring these two artists in the face for the longest time. It wasn’t until the duo dropped the incredibly stellar first single, “Lave The Door Open,” that the world immediately fell in love with their 70’s blend of hip-hop, funk, soul, rap, and R&B. The track, and the album by extension, are each musician’s greatest strengths combined into one blissful sound. After listening to the album many times, I can confidently say it would be a mistake for these two to leave this project as a one-time fling.

“Silk Sonic Intro” is a solid way to introduce audiences to the album and the group as a whole. Although it feels a little silly to have an intro track on an album that’s only about 30 minutes in length, the personality, charisma, charm, and fun packed into this project is immediately recognizable through this first track. It starts with Mars and Paak singing “Who y’all came to see tonight? Who gon’ get the ladies feeling something?” This playful sexually charged lust for women permeates most of the album, so it’s appropriate that they immediately tell us what mood they’re going for. Then the drums kick in with a grand piano and a horn section to fully submerge the listener in this grand, retro flavor of funk. It’s also here where the duo introduces the guest host of the album: classic funk musician Boosty Collins. In spoken word lyrics, he proclaims himself as “blaster of the universe” and the “creator” of Silk Sonic. He’s a recurring voice across the album, almost making it a loose concept album of sorts, yet Collins doesn’t really add much to the experience other than allow Mars and Paak to pay homage to one of their influences and I personally could have done without it.

Then we get “Leave The Door Open,” an impeccable first full-length track. It’s a track that completely embraces the name of the group because of how silky smooth this song is as a listening experience. It’s this romantic, ballad-tempo profession of love brimming with personality. I’m gonna say it here once as a blanket statement that can be applied to every song on the album: there are countless quotable and hilarious lines on this album from both Mars and Paak. The character these two bring in their lyrics is unparalleled in pretty much anything I’ve heard this year. Paak is especially funny in this song. The percussion on this track is great with some moving drum fills on the verses and shuffling snare moments on the chorus that keep the track from ever getting stale. Speaking of the chorus – it’s perfect. Mars’s vocals are insanely good and the background vocals fill the listener’s ears in a way that lifts you off of your feet. It’s catchy, the instrumentation is rich, and the mix is so incredibly crisp that I can’t really find anything bad to say about this song. I love how the track progresses structurally and I adore the outro with its “la la la’s.

“Fly As Me” begins with the same audio clip of Paak counting into the song as the intro to the album does. While it may come off as a cute callback to some, it just feels like a cheap rehash to me. It even reappears in a later song on the album, “777.” For an album as short as it is, it shouldn’t be repeating itself. The same thing happens with the atmospheric “creaking” sound that plays in the first few seconds of “Leave The Door Open,” this time appearing in other tracks either pitched down a bunch or slowed down. Again, not really a fan of this type of repetition in this way.

Regardless, “Fly As Me” is an absolute banger. It’s got that old-school hip-hop vibe with a killer guitar line and a crunchy drum beat as Paak effortlessly glides all over this thing. The chorus begs to be sung along with its group vocals and is a huge dose of self-confidence thanks to the braggadocious and confident lyrics. They’ve nailed the aesthetic they’re going for on this track to an absolute T. It’s pure fun from start to finish.

“After Last Night” begins with a spoken word intro from a woman recounting a sexual experience from the night before, moaning directly into the listener’s ears multiple times. I’m not a fan at all of the moaning; it’s actually quite uncomfortable. You didn’t really need it anyways when the song is about the feelings the speaker has after a sexual experience from the night before. Then they follow it up with another spoken word section from Boosty Collins, which is equally as unnecessary. I personally would have been fine with just taking in the spacey instrumental.

Apart from the unnecessary intro, this is easily the most intimate and sexy song on the album. The beat is reminiscent of the funk/soul that Childish Gambino was going for on his song “Redbone.” The track is as smooth as butter and really glittery and dreamy with twinkling keys and atmospheric guitars. The verses aren’t as captivating as the other songs, but it has a strong chorus and the production alone is enough for me to like the song. It also ends really strong with these large, layered vocals. The harmonies on this thing are amazing.

“Smokin Out The Window” is another heaping slice of vibe pie. It’s got a pretty similar formula to “Leave The Door Open,” but it’s a formula that doesn’t get old or any less enjoyable to listen to. It’s got that smooth percussion, great use of strings, beautiful vocal performances, and funky guitars. The track also has some great lyrical moments about heartbreak but plenty of funny moments about kids running around Mars’s crib like it’s “Chuck E. Cheese” or how this woman left rent payments completely up to Paak. I love Paak’s ad libs on this song to fill out the moments without the main melody.

“Put On A Smile” is the most sentimental song on the album. It’s essentially about being unable to get a single person off of your mind and that no other lover has been able to replicate what this person brings to you. The track is noticeably darker sounding than the other tracks, which I love. It’s the right mix of melancholy and passion and has one of Mars’s best vocal performances on the project. The drum and piano hits on the chorus feel really grand and are satisfying to listen to. It almost takes me back to some of Mars’s old projects with this “heart on your sleeve” attitude.

“777” is easily the most fun 3 minutes on the album. It’s high-energy, has my favorite guitar/bass line on the album, and you can genuinely feel how good of a time Mars and Paak had on this song. The drums, Paak’s flow, and the guitars create this extremely danceable groove pocket that feels like it’s scratching this other itch that the album really needed. The chorus opts for an instrumental party with a horn section after hitting the jackpot (hence the title of the song). This may sound disappointing on paper because the other choruses were so strong, in part, due to their vocal performances, but the overall mix of sounds here just sounds like a celebration you want to be a part of.

“Skate” is another uptempo, danceable track that feels like something that would appropriately play at an 80’s skating rink. Lyrically, it’s not anything particularly new as it’s about the desire for a woman, but it’s a slightly different flavor of this sentiment. Without sounding like a broken record, the star here once again is the immaculate production, the vocal performances, and the overall old-school vibe that just sounds so sweet. I especially love how sharp and well-integrated the use of a string section is on this track. The final chorus steals the show as Mars takes the melody up a notch.

The album ends with “Blast Off,” a song that slows things down and aims to make the listener float off to space. While the production absolutely succeeds in capturing this vibe with how colorful this song sounds with the strings, the dreamy melodies, the atmospheric synths, and an absolutely killer guitar solo (which I wish was way louder in the mix – why is it that quiet?), it’s not as consistently exciting as the other tracks. I would have preferred for a more grand finish, but it’s still a solid end to the album and I like the reverb-soaked outro. As the last track, it doesn’t do anything particularly invigorating.

Although An Evening With Silk Sonic comes to an end while the night is still young, this is one of the most well-produced, addictive, and satisfying listens of the year. Everything from the vocal performances to the charismatic lyrics to the rich instrumentation captures this old-school vibe so well and sticks itself into your brain. While the album is a bit iterative at points and heavy handed with its influences, An Evening With Silk Sonic is a project that I’d find hard not to recommend to everyone.