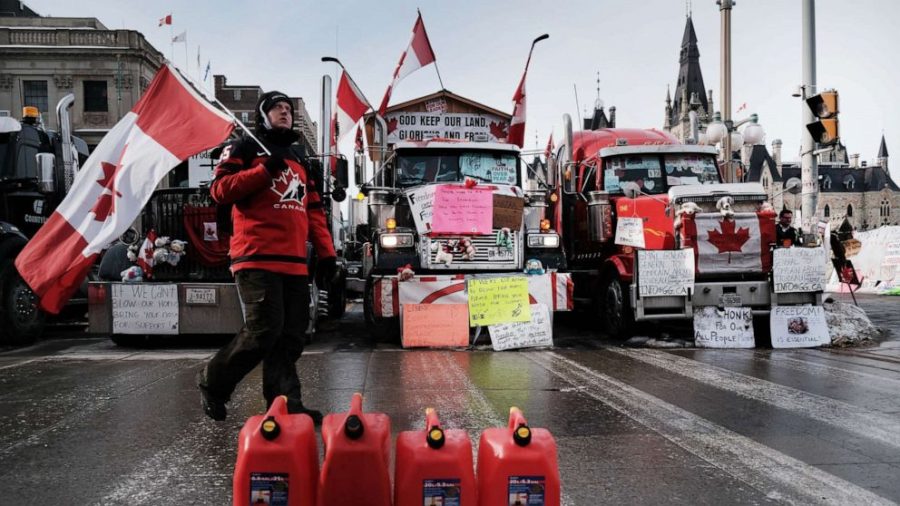 As many readers know, a massive protest in Canada took place recently, specifically over vaccine mandates over the last few weeks.

Truckers blocked streets and protested for weeks in the nation’s capital, Ottawa, causing hundreds of millions of economic damage. Just one contingent of the “protest” was causing over $300,000,000 in damages a day by blocking a bridge between Canada and the US. It’s also important to note the numerous connections the protest has to far-right and neo-Nazi groups.

In light of this event, The Comenian interviewed Dr. Jamie Paxton, a history professor at Moravian who specializes in Native American history, specifically that of the Mohawks. Paxton was born and raised in Canada in the Niagara Peninsula of southern Ontario and is a Canadian citizen. He completed his undergraduate degree at the University of Toronto, M.A. at Virginia Tech, and his Ph.D. at Queen’s University in Kingston, Ontario.

“One thing to keep in mind is that the “trucker” convoy does not represent the large majority of truckers,” said Paxton. “The Teamsters Union, representing truckers in the US and Canada, has denounced the convoy and something like 90% of Canadian truckers are vaccinated.”

Why was the trucker protest such a surprise to most Canadians?

If the convoy surprised people, it was likely because Canadians are deeply invested in being different (can be read as morally superior) from the United States. Consequently, Canadians are adept at ignoring or explaining away elements in their own society that they associate with the United States, such as the anti-vaxxers, anti-government types, and white supremacists who joined the convoy. Many dismissed the convoy as an aberration or claimed that it was really organized and funded by Americans. Commentators even suggested that protestors shouting freedom was evidence of foreign influence. Freedom apparently is not part of Canadian political discourse despite the fact that the word free appears twice in the Canadian anthem. So I think Canadians did not take the convoy seriously at first because it did not comport with the idealized image they have of themselves.

Why was the Canadian government slow to respond to the protests?

The right to protest is protected under Canada’s Charter of Rights and Freedoms. However, that does not explain why this protest has gone on for so long when the courts have been quick to shut down other protests. The truth is that the people taking part in the convoy were predominantly white. Canada’s First Nations will tell you that the RCMP routinely beat and jail protesters in the process of breaking up protests and blockades.

Do you think this protest by Canadian truckers will inspire similar protests by truckers in the U.S.?

I do not know but it seems likely, as there have been similar protests in other countries and I have read that convoys are being organized. [Note: As we go to press, a US trucker convoy is gathering in Washington, D.C., to protest COVID policies, many of which are far-right and connected to the attack on the US Capitol building on January 6th, 2021.]

How are Canadians in general dealing with the COVID pandemic? How is that similar or different to the way we’re dealing with it here?

Canada has been more successful in dealing with COVID than the United States. Infection rates are about half that of the US and death rates about a third. Despite the image that the convoy projects, a large majority of Canadians support vaccine mandates, vaccine passports, and mask mandates. About 80% of Canadians are fully vaccinated. Having visited Toronto during the pandemic, I can say that there is a very different culture around the pandemic. People wear masks everywhere, even outdoors, and carry proof of vaccination cards.