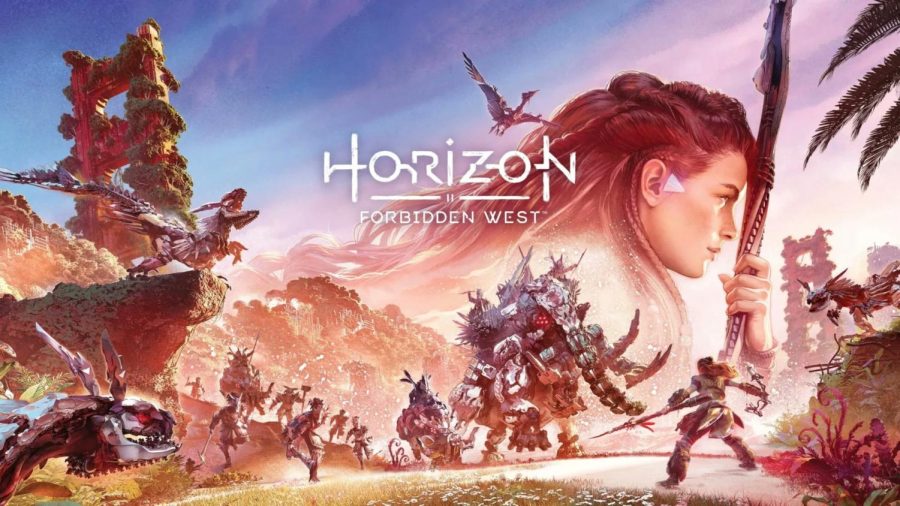 “Horizon Forbidden West” is a triumphant generation-defining open-world game that absolutely lives up to the original, “Horizon Zero Dawn.” This game is a true sequel for better or for worse to the original. Instead of trying to reinvent the formula or appeal to newcomers, this game continues to expand and improve on the formula that made “Zero Dawn” so great, while also falling into some of the same pitfalls as the first game.

Firstly, the soundtrack is really good. The first game had a decent soundtrack, but I wouldn’t say it was particularly memorable outside of the astounding main theme. In this respect, this game is a significant improvement. When I try to determine whether a soundtrack is good, it usually boils down to if the music grabs my attention or if it just acts as background noise. Here, I took frequent notice of the great music on display. It feels like composer, Joris de Man, pulled out all the stops here and it shows. The music frequently services the scenes at hand. The combat music particularly felt like it improved by a significant degree.

The main theme is similar to the first game, but that’s by no means a bad thing, as it’s still one of the best pieces of music to come from a video game. It perfectly emphasizes the grand scale of the story, while also serving a more personal and impactful purpose through many of the major moments throughout the game.

Graphically speaking, I do not hyperbolize when I say that, as of March 2022, “Horizon Forbidden West” is the best-looking game I’ve ever played.

This game is a graphical masterpiece. From the lighting, character models, clothing, grand vistas, vegetation, and art design, every aspect of this game looks astoundingly beautiful. More than any other game I’ve played, I frequently stopped just to admire the jaw-dropping scenery. I can’t believe that this game can run on a PS4. Even watching gameplay or looking at the gorgeous pictures taken in photo mode doesn’t do this game justice.

From the dungeon-like cauldrons, the desert lands of Nevada, to the ruins of San Francisco, every locale here looks like a work of art. It’s not just the impressively realistic graphics that make this game shine, though, it’s also the great art design. The Forbidden West provides some of the most visually interesting locations and settlements in a video game. The opening settlement of Chainscrape carries similar looks to the first game, but still looks incredibly beautiful. Where the game begins to really shine is once you head into the west and find different tribes such as Plainsong, the Tenakth, and the Quen. Each has a completely unique design and culture, and it feels like no two places are the same in this world.

The gameplay here is in my opinion the best in any open-world game (besides maybe “Elden Ring”). No other open-world game provides such a unique and engaging gameplay experience except maybe “The Legend of Zelda: Breath of the Wild.”

In many aspects, though, this game is far better than “Breath of the Wild” in terms of gameplay because combat legitimately provides an interesting challenge that requires you to use all the tools at your disposal. Even in the first game, you could scrape by just using a regular hunter bow with normal arrows but here, they made the game a bit more challenging, requiring you to properly know and respond to different enemies.

Very few open-world games provide the same amount of meaningful variety in enemy types as Horizon. Furthermore, the weapon variety is great and each type is satisfying and extremely fun to use.

Of the new weapons, my favorite had to be the spear launcher, which is equivalent to the real-life atlatl spear-thrower (Thanks Dr. Paxton). Every weapon type feels unique and has a definite purpose. Even within the same weapon type, you can find vastly different uses with different ammo types. The combat is extremely versatile and provides a fun variety of options to tackle each fight. Each new machine requires a different approach with different weak spots and vulnerabilities meaning you have to maintain a diverse arsenal to be well equipped for most combat encounters. It’s the kind of gameplay that will keep you on your toes and make you think about how you approach different combat situations.

Traversal is a significant improvement here as they take all the limitations that hindered the first game and expand and improve upon it.

Climbing is now less restrictive and limiting, as you can now climb up surfaces that aren’t marked by random yellow handholds, which makes climbing feel a lot more versatile and immersive. Despite that, it still lacks a lot of fluidity and grace and feels a little clunky and unsatisfying. Comparatively, the old “Assassin’s Creed” and “Uncharted” games gave the player a good amount of fluidity and control of movement. In those games climbing felt a bit like a puzzle, whereas here it feels like a means to an end to get from point A to point B.

The game also introduces a glider that significantly improves moment-to-moment traversal and gameplay, as it’s a tool to scale down from high-up locations and also to maneuver in combat. The game also introduces the pullcaster which can function as a grappling hook and also a tool in puzzles. This makes a bit less of an impact on the gameplay, but it’s still welcome nonetheless. It makes traversal just a little more diverse and satisfying and it can be nifty to get out of some tense combat situations.

Storywise I think is where the game experiences the most issues, which isn’t all that much, to be honest. The story falls into some of the same potholes as the first, but admittedly they did smooth over some of the rough edges. Just like the first game, there is a lot of sci-fi exposition and mumbo jumbo. To me, that wasn’t much of an issue, because I like that sort of stuff, but at some moments the high sci-fi elements did get a little much. Where the story improves over the first is that the characters help to ground it a lot better than the first. In “Zero Dawn” there were only a handful of interesting characters, but here the characters are much better written and actually get things to do outside of just showing up to help the protagonist, Aloy, from time to time. Side quests are also significantly better this time around, as they actually feel like they are worth doing and have fairly interesting characters and storylines. With that being said, the comparisons to the side quests in “The Witcher 3” are a little much. The quests here are good, but they don’t even come close to the astonishingly good quests in that game.

I will say though the characters, while better than the first, still aren’t the best I’ve ever seen outside of two of them. Most characters, while good, aren’t great and they could’ve done more to flesh them out a little more. The worst offender of this is Regalla, played by Angela Bassett. She was plastered all over the marketing and even got one of the collector’s editions of the game named after her, so it was shocking how little this game utilized her. Until the final act, her and Aloy had one spoken interaction at the very beginning of the game and she showed up once more before the finale. I think the developers were going more for a character whose presence is felt even when off-screen, like Darth Vader or Hannibal Lecter, but it just didn’t work. The game never makes her feel like an intimidating presence or makes you feel like she has a lot of power behind her. Regalla and her army come off more as an annoying nuisance than an engaging threat, which is a shame considering the great actress behind her.

Comparatively, Tilda, played by Carrie-Anne Moss, also has relatively minimal screen time yet marks an enormous impact on the story and ends up being one of the best characters in the game. They make effective use of her screen time, so in the little time she has, she feels more like a 3-dimensional character than Regalla does for the entire game.

Now I’d be remiss if I didn’t talk about Aloy. I had already liked her in the first game, but I wouldn’t have considered her to be one of the best characters in gaming quite yet, because her journey was more defined by the mystery of the old world and her lineage from Elizabet Sobeck. Here, though, with all the mysteries around her identity unearthed,  she truly gets to shine as her own character as her journey here is one of personal growth, rather than being defined by her genetic mother. Aloy in this game feels like she has definite character flaws and personal challenges to overcome and goes on a journey of finally learning to trust and reject her outsider instincts. It’s a beautiful journey that gave me chills by the end.

While it falls into many of the same issues as the first, “Horizon Forbidden West” is a remarkable improvement over the already great “Zero Dawn” with a great story, excellent gameplay, beautiful visuals, and a good soundtrack. This game feels like Guerilla Games took all the criticisms from the first to heart,made vast improvements, and the final result is an incredible game that will be sure to define this generation going forward – just like the first game did five years ago. With a sequel surely on the horizon, (pun intended) I can’t wait to see where they go next with this fantastic and unique world.