Chemicals and Corruption: The Prejudicial World of Environmental Racism 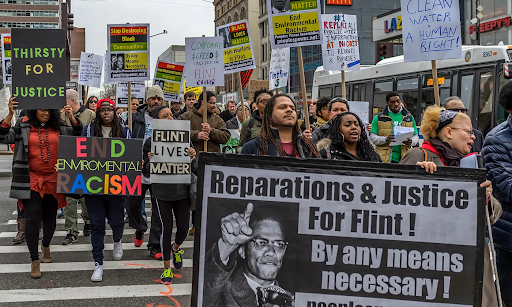 For Moravian’s last Friday Forum for the Spring 2022 semester, Dr. Natasha Woods, assistant professor of biology, initiated a profound discussion on environmental racism and its negative impact on low-income communities inhabited by mostly people of color.

In the 1980s, substantial organizations like the Sierra Club began openly demanding environmental justice tied to social justice. Such organizations also cover environment-related news and collaborate with the divisions of the U.S. Environmental Protection Agency (EPA) to help with disenfranchised locations such as Flint, Michigan, where its residents suffered through a poison water crisis.

The forum began with an informative article/short video that highlights the main points when it comes to learning about environmental racism. Again, environmental racism is defined as a form of systemic racism that figuratively and chemically plagues marginalized communities from African Americans to Indigenous populations.

After the video, Dr. Woods detailed her upbringing in Anniston, Alabama, a segregated town that was split by the “white side of town” and the “black side of town.” She reminisced on her childhood as being relatively happy and  heavily involved in her community; she recalled the large celebration held each year for the African American holiday Juneteenth.

Not far from her town and the Alabama-Georgia border is Monsanto, Alabama, which was home to a nuclear plant and a specific toxic chemical called Polychlorinated biphenyl (PCBs). For 40 years, the Monsanto plant toxified nearby Alabama waters and severely lowered the air quality.

Woods talked about the Choccolocco Creek in Anniston where biologists came to test the water quality as well as the fish within the creek. They noticed that when placed in a different water location, the fish died within three minutes. Biologists urged Monsanto to inform the community of this alarming development. At first, Monsanto claimed to not know about the damage PCBs were causing and never released the information to the public, claiming that the waters are safe. They knew informing the public would result in reduced profit so they kept an apathetic position, implicitly regarding profit incentives as more important than actual human lives.

In 1971, Monsanto stopped making PCBs, but since the toxic waste had permeated the environment for 40 years, the damage was already done. From kids playing in ditches to families camping outdoors, people were randomly getting sick. In 1993, someone caught a fish with abnormalities which raised concern in the community. At the time, no one could make sense of the perpetual sickness, only knowing about the stockpiling of chemicals. Woods remembered kids from her school becoming gravely sick and seeing a 10 year old randomly develop a deadly illness and soon die from it.

However, once information on the hundreds of pounds of PCBs slowly destroying the water and air quality finally reached the public, outrage ensued. People became aware of the sickness coming from the water and soil and demanded justice. Woods noted how Monsanto was “just letting Black people die of syphilis and cancer.” Black and white communities unionized to fight the disenfranchisement as the toxic waste eventually reached white communities. 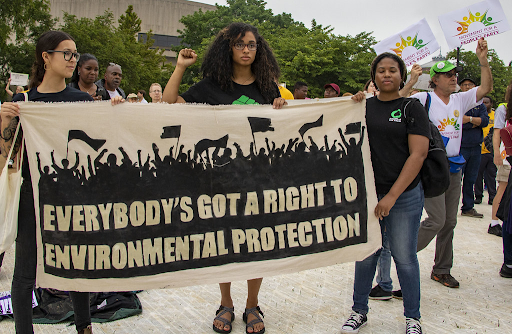 Woods highlighted how PCBs bioaccumulate in the body through consumption. When consumed, the chemicals attach themselves to fatty tissues and accumulate, causing illness to the individual.

“If PCBs are so safe [according to Monsanto] then why were they being dumped on the black side of town?” Woods asked.

As she recalled it is harrowing to be a teenager in 1996 and learning that one of your classmates died because of the toxins in the air and water and seeing Black people die because of the neglect of a white-owned nuclear plant. Additionally, it is heartbreaking to see your beloved town that you grew up in called one of the most toxic cities in the East coast. Even having EPA coming to test the soil and waters does not help when they disrespect the cultural essence of the town.

Finally, in the present day, Woods reflects on how even after all the turbulence Monsanto has caused, nothing has been really done for Anniston or its soil and water. After all these years, sadly, everything remains the same with no respect for the Black people in Anniston still directly affected by the chemicals. Although nothing has progressed, she emphasized the importance of news outlets still covering the effect of 40 years of chemical waste going into the water, soil, and air, even if such outlets take a neutral stance.

At the end of the forum, attendees were able to add their own input, with some attendees weighing on similar instances of environmental racism with the Flint, Michigan, lead water crisis as a prime example and the overall vulnerability and susceptibility to low-income people of color.

Dr. Joyce Hinnefeld, associate professor of English, weighed on these companies valuing profit incentives over the lives of people, wondering, “When will we have this reckoning of the costs of putting business first?” She brought up intersectional environmentalism which hones in on inclusivity, advocating for justice for people as well as our  planet. She also mentioned more about the Flint water crisis, specifically noting how people were being told to be careful of the water when the city officials should be the ones monitoring the harmfulness of water.

With growing concerns about global warming and the state of our planet and recent waves of social justice that have become more mainstream over the years, this forum helped inform its attendees on the pertinence of environmental racism. It is a branch of discrimination that is not discussed as much but is still very significant for the way it is targeted towards communities of people of color. Some battles like the one in Anniston have yet to be brought to justice, but recently, other areas subjected to racism like Chicago’s Southeast Side have been granted the justice needed to keep communities of color safe.

In 2018, a car-shedding facility started an operation for a multi-billion dollar development that would cause pollution in nearby communities of color. Chicago’s Southeast Side community retaliated against this move by the company known as General Iron, fighting in a city already plagued with pollution.

Environmental justice organizations recognized this plight and advocated alongside the communities of color, even when General Iron threatened to demolish the Southeast Side. This month, with such a diverse community coming together to protest, General Iron finally gave in and decided to relocate elsewhere, citing a large victory for the Southeast Side.

Other locations around the country have yet to see the victory that the Southeast Side has seen but possibilities still stand and maybe Anniston will see that possibility as well someday.