A CNN Analyst’s Take on the Trump Presidency 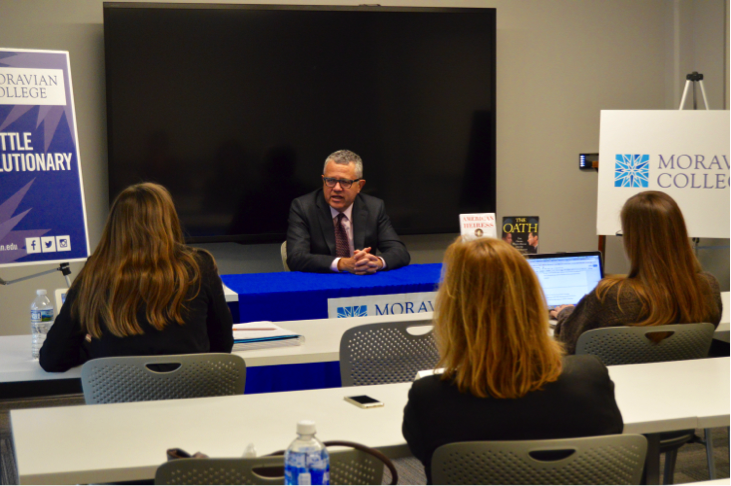 In light of the recent election of Donald Trump as president, let us reflect on the session that author and CNN political analyst Jeffrey Toobin held with a number of students on October 26, a week before the election

No matter whom you voted for or how you feel about the results, this was undoubtedly one of the most important elections of the century.

So what exactly is at stake in this election? Jeffrey Toobin discussed four main aspects: the Supreme Court, the importance of Pennsylvania as a swing vote, abortion, and Muslim student concerns. This is an extremely emotionally-charged time, but no matter who won the election, it would most likely have resulted in the same emotions. The focus of the nation now should be on the possible long-term consequences of the election.

Of those consequences, the Supreme Court nominee is the most important, not just in replacing Justice Antonin Scalia but also of the other seats as they become vacant. Currently, there are four Democrats and four Republicans in the Supreme Court, with Justice Scalia’s seat open. President-elect Trump will surely choose a conservative, which will tilt the Supreme Court in the Republican’s favor. In addition, if any liberal justices retire or pass away during Trump’s presidency, then the Court will become even more conservative; thus, in Jeffrey Toobin’s words, whoever won the election would have an “impact well longer than their term in office.”

Toobin also explained the importance of Pennsylvania as a swing vote, not only for the presidential race, but also for the senate majority. He does not approve of the “undemocratic” system of the electoral college and instead believes direct election through popular votes would be fairer.

The electoral college is extremely confusing and, as Toobin argued, “undemocratic.” Most people agree that presidential elections in some ways are actually rigged because a candidate can win the popular vote but not the overall election. I compare it to a classroom of children raising their hands for an activity. The electoral college seems to, instead of counting each hand as a vote, counts one child’s hand as more than one vote with others being stuck with one vote.

Other concerns students had were on the possible overturning of Roe versus Wade, the 1973 Supreme Court decision that granted women the right to an abortion. If this were to happen, the legality of abortion would fall into states’ hands, Toobin said, and some would pass laws outlawing abortion. This is not the answer to preventing abortions, he claimed; women will simply find other, more dangerous means to have abortions and even more lives will be lost. Whether you believe in abortion or not, losing even more lives by outright outlawing abortion is definitely not the answer, Toobin argued.

Some Muslim students in the session expressed their concerns about Trump being elected. Toobin explained that there has “never been a purely religious quota in religion” and it is, according to him, impossible to pass a law targeting a specific religion. In Toobin’s opinion a Trump presidency would result in “less immigration” and more expulsions.

Jeffrey Toobin, and I as well, recognize the dangers to women as well as minorities in a Trump administration. Things will change, that is for sure, but it is important to keep an open mind and to also not become violent toward Trump supporters.